Do You Recognize This Arson Suspect ?

Investigators have released a video and description of a suspect in two arsons in early September.

The suspect is sought in connection to two fires in garbage receptacles that occurred within two hours of each other on September 17th, 2019.

Victoria Fire Department firefighters responded to the first fire that was set in a City of Victoria garbage receptacle in the 900-block of Yates Street just after 1:38 a.m. on September 17th. That fire was extinguished. No one was injured.

Victoria Fire Department firefighters were called to a second fire just after 3:15 a.m. This fire was set in a garbage dumpster in the 1100-block of Grant Street. No one was injured in this fire. That fire was also extinguished. Surveillance video and the investigation point to these fires being linked and set by the same suspect.

The suspect is described as Caucasian, standing approximately 6 feet tall with a slim, lanky build. The suspect was wearing black pants and a black jacket over top of a greyish blue hoodie and toque. Video of the suspect is below.

If you recognize this person, or have information about these incidents and you want to reamain anonymous, please call Greater Victoria Crime Stoppers at 1-800-222-8477 or visit www.victoriacrimestoppers.ca 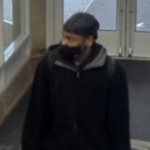